This website contains products that are only suitable for those 18 years or older. Click Enter only if you are at least 18 years of age.

Products may contain nicotine, which is an addictive substance.

or Exit
Skip to content
Cart
Online orders will be processed as usual during lockdown. Keep safe and be kind!
Uwell Caliburn device: $45.00
Caliburn Replacement Pods: $24.90

The Uwell Caliburn is a pod system that combines a 2ml e-juice capacity cartridge with a 520mAh battery. The coil inside the cartridge is unique as it more resembles a cartomizer or tank coil with its stainless steel wire in a parallel build.

The battery features a single power button, and vapers can choose between draw-activation or manual firing when vaping. The exterior of the device is an aluminium alloy with plastic elements in the pod.

The cell can also output a maximum of 11W and the coil can fire as low as 1.4ohms. The pods connect to the battery section through a magnetic connection, and there is a micro USB port on its tip for quick charging.

The Uwell Caliburn has a very simple design. The device is unremarkable in its simplicity, but its straightforward appearance and operation are also its biggest assets. The battery section has a single button on its front, along with a small LED to show battery life (green – over 60%, blue – 30-60%, red – under 30%) and when this all-in-one device is in operation.

The entire battery chassis features an aluminium alloy build, and when the pod is installed, the unit weighs just over 30g, making it lightweight and portable. Together, the Caliburn measures just over 110mm or 4.3 inches and has a width of 0.5 inches.

There is a bottom USB port for charging the 520mAh battery, and with 1A charging the battery only takes about half an hour to recharge. Like the Suorin Edge, the Caliburn has a combination drip tip/pod but with one important difference – the drip tip is removable, which hides the top-filling method of the system. 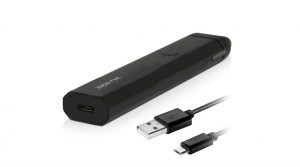 The fill ports (there are three of them!) are wide and can support many different bottle tips without any chance of leaking, as the transparent body allows for easy visibility. While the rest of the Caliburn might seem like every other ho-hum pod vape, the real unique feature lies hidden in the pod. 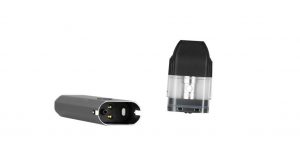 There is a stainless steel/organic cotton coil head in a parallel build inside the 2ml cartridge, which is almost unheard of with pod vapes. With this type of coil design, the Caliburn can put out much bigger, and flavorful clouds than other typical coil heads.

The Uwell Caliburn comes with the following kit contents:

Working and Vaping It

There is very little you need to do to get the Caliburn started. Charging the battery would be the first thing to do, and even that simple task is not the easiest, which adds to the device’s straightforward usability. After the battery is charged, filling the pods is another walk in the park.

The fill ports (did I mention there are three of them?) make for a simple filling process, much simpler than with other pods that have tiny (like the Edge), or proprietary fill ports (like with the Vaporesso Aurora Plus) that can lead to spillage and an overall mess.

It should also be mentioned that the battery section has a small cutout, which acts as a viewing window when you install the cartridge. You can clearly see much e-juice you have left since the plastic construction of the pod is clear and transparent.

Fill and attach the cartridge, then press the central firing button five times to activate the battery. The battery supposedly switches to manual draw operation if it detects the auto-draw functioning has stopped, but it’s not clear if you can select between automatic or manual operation. As soon as you turn on the battery, you can start vaping.

With a genuine, vertical coil head inside the pod, flavour and vapour production for the Caliburn is exceptional, especially for this type of device. As most pods opt for wicking material (silica, or some other synthetic material) not common to other coil builds, the flavour and vaping experience are different than those standard wire and cotton coil heads.

But with this design featured in a pod vape, the vapor is as good as it would be with those higher-powered devices. The coil fires at a resistance of 1.4ohms so you can take some good MTL hits, but drawing longer on the mouthpiece can also produce a satisfying DL hit as well, along with great, voluminous clouds.

The Life of a Pod

The Caliburn pods are essentially a plastic shell around a stainless steel coil. They can hold 2ml of liquid, which is a good capacity for this type of vape. They connect to the battery section via a strong, secure magnetic connection and there is very little movement when it is in the mod. 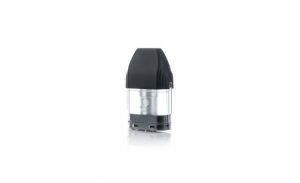 There is a second latch that clicks the pod into place when you insert it, but make sure the connection is made as the coil may not fire if the contacts are not touching. The mouthpiece/drip tip is removable, and it also acts as the stopper for the top fill ports. 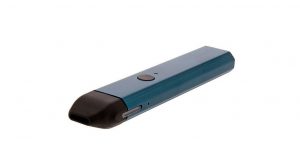 The life of the pod depends on how strong and how often you vape. The coils stand-up well to all kinds of juice, including high VG e-juices that add even more cloud production for a tiny little device. With a high VG e-juice, the flavour is also excellent. But using nicotine salts with the above-ohm coil also produces amazing results.

The Competitors: the Uwell Caliburn vs. the Juul vs. the SMOK Nord

The mother of all pod vapes, the Juul continues to reign over this style of vaping with its easy-to-use, buttonless, auto-draw configuration. The Juul pods are not refillable, but they come in almost five different flavours with new ones being released all the time.

They can hold close to 0.7ml of e-juice and the nicotine strengths of each flavour range between 3% and 5%. The Juul battery uses a proprietary charger and takes almost 40 minutes to charge.

The SMOK Nord is a vape device with a 2ml pod that can support both an MTL coil, 1.4ohms, and a DL 0.6ohm coil. The cartridge is unique in that you can remove and replace the coil, rather than the head being built-into the device.

The Nord battery has a capacity of 1100mAh and also uses dual-firing methods, with a central firing button for manual vaping, as well as for enabling the auto-draw feature.

It is true that pod vapes have taken up a large part of the market, as almost all vape companies have their version. They have tried to set their devices apart, but with an AIO vape that is hard to do since they are so simple and making them more complicated is counterintuitive.

Uwell has succeeded, however, in setting their device apart, and in the most obvious way. Their design succeeds by replacing the coil type customary to these types of vapes with a real coil head that translates to better overall vapour quality.

The cartridges are easy-to-fill, easy-to-install, and have a very good life, depending on usage. They work well with all kinds of e-juices and only slightly lose performance when the battery loses power. The battery has quick USB charging, although it does not have a pass-through charging feature, the short charge time can get the Caliburn burning again in no time. What do you make of this sudden onslaught of pod devices? Do you think it is the direct influence of the Juul that is inspiring companies to make their own pod vapes? Share your thoughts by writing a few lines in the space below.